A Classic Project with an Amazing Back Story

While visiting Melbourne's Motorclassica event this year, I came across a welcome surprise. It was only six months earlier that boxes of tired looking Vincent parts had been dropped into our shop and yet here was the completed bike, finished, looking fantastic.
Back in 1949 only 76 'B' Series HRD Black Shadows were ever built and only one left the production line with the motor unpainted. This bike is what became known as the 'White Shadow' The HRD had been found in the US Virgin Islands in 1974, chained to a palm tree with both heads and barrels removed and suffering badly from exposure to the elements. It was purchased and shipped to the USA, then remained in a crate for the next 40 years where the current owner discovered it. As it was in such poor condition it took over 3 weeks to carefully dismantle and evaluate everything before beginning the restoration.

A Clean Difference - some things to consider

Here's a piece I wrote for the Norton Motorcycle forum some time ago. It helps to explain a few things we are frequently asked by both bike and car restorers.


We see quite a few Norton's in our little shop down under and after reading all of the different views on blasting, I thought I may as well offer my two bob's worth.
I've somehow ticked over 40 years as an machinist and engine builder here in Melbourne, Australia. Metal finishing is also a huge part of my life. During that time I've tried just about everything you can think of to restore componentry back to it's original condition safely.

As far as engine parts go, dry bead or grit blasting is out of the question. The reason is simple. the dry media imbeds itself into the metal and is damn near impossible to scrub out.
Back in the 90's a rare Lancia engine we were building was ruined by the local sandblasting hero. The damage inflicted by the blasting was amazing. Days were spent on the Bridgeport mill re-machining every mounting surface that had been ruined by this bloke's effort. Just when you thought it was clean, you'd discover more abrasive hidden somewhere - a real problem!

We spent some time wet wire brushing (which was at least a safe option) but it was then that we decided it was time to investigate something better. The wet abrasive blasting process had been used by aircraft engine companies on turbine overhauls for years and we found it suited our needs perfectly. Since 1995 we have tried this technique on nearly everything you can imagine. Our process is definitely different (and safe when post cleaning is carried out correctly)

The Processes...
After hot washing or tanking a customer's parts, the next step is inspection and masking. (Some surfaces should be protected - like the slider in a carby for instance.
We often heat up and remove bearings and other small assemblies that customers aren't comfortable touching themselves. The correct mix of media is then chosen for each particular job, depending on the surface finish required. The mix of media, water and detergent massages the part. With the water used as a carrier as well as barrier, it softens the impact of the media preventing the ingress of abrasive particles into the metal surface. Next, the part is transferred to another similar machine for final bright finishing. This results in a look as close as possible to the original fresh metal. If there is a better way, I have yet to see it.

Now, the important bit...
The part is thoroughly washed off with water (including every bolt hole, oilway water jacket etc) - however it's still not clean enough yet! Checking each part over, we look for any hidden areas or passages and take a little tour of the oil system. If a manufacturer uses a peened in oil galley plug, it's drilled, tapped and removed using a small slide hammer. A new galley plug is easily made. Without removal there's always a chance that the first oil the bearings see will be mixed with abrasive.
(It all sounds a bit dramatic but in the right workshop environment, it's very straightforward and fairly inexpensive)
After a solvent wash and another water wash, followed by a detailed air blow-off we're all done. Remember, wet abrasive doesn't imbed into the metal but still ends up in bolt holes and galleries where it is easily removed, unlike dry blasting. If you don't believe it requires all of these steps, then stay well away from any blasting - it will end in disappointment.

Here's a good example that will make it clear how gentle our process is.
An aluminium Mercedes Benz V8 runs (.01mm) piston to bore clearance (yes that's less than half a thousandth of an inch or .0004"). The piston also runs in a silicon aluminium bore, yet we regularly detail and refresh pistons for these engines utilizing the wet blast system. Using these processes can bring back, not only a beautiful appearance but much improved functionality. If you've read this far thanks for hanging in, your engine will definitely thank you.
Cheers Greg

Sitting here writing, I can hear the feral sounds of Melbourne's Formula One racing events in the distance. That's hard core music to us rev heads! It's a pleasure again to share some pics sent by three very talented motorcycle builders. We really enjoyed working with and assisting each one of you with your two wheeled pursuits. We also encourage you to share your photos with us at any time.
Click on the photos to view a larger image.

Hydroblast at Broadford Bike Bonanza - See You There on Easter Saturday, April 15 2017

The Woody's are on the move. We're heading to Motorcycling Australia's premier event for all types of bike enthusiasts, the Broadford Bike Bonanza. For details check out MA's website here.
Here's the complete timetable for this Easter weekend event, there's something for every genre of bike fan. Greg and Louise will be there all day Saturday and would love to meet you. We'll be stationed at our trade display, in the swap meet area.

Pleased to be able to say we're back on deck at Hydroblast. We've really missed seeing a lot of our old friends and look forward to welcoming you to our refurbished Highett headquarters.
It's also an appropriate time to thank the handful of exceptional people who got me over the finish line when it felt like we were herding cats. Mark, Michael, Don, Greg, Mario and especially my better half Louise. Thank You.

If we can help with your restoration project, give us a call.
Our phone number is the same as always - (03) 9597 0387
Just look out for the red letter box!
Cheers Greg

1990's Advertisement - What were we thinking? 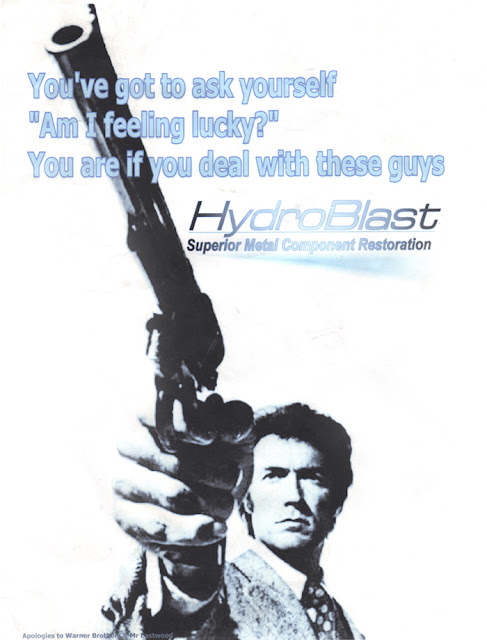 It's a funny thing looking back, I've always loved the craft of film making as much as the engine building world. Clint Eastwood was so politically incorrect in 'Dirty Harry' but you had to admire the way his character fought the system. Film maker Eastwood has continued to write and produce thoughtful work up until his 86th year and his stories continue to remind us that it's wise to keep our eyes wide open to social injustices. Do you feel lucky?